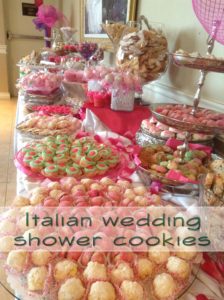 The Italo-Canadian Bridal Shower Cookie Extravaganza is making a comeback.  (I say “Italo-Canadian, as it seems to be customary only among Canadians of Italian descent who reside in Ontario and Quebec).  The custom of Italian Bridal Showers, has morphed over the last 30 years starting out as a huge event consisting of over 200+ women most of whom were typically immigrants or first generation Canadians marrying off their first generation offspring, typically to children of their contemporaries.

Let me begin by telling you what ItaloCanadian Bridal Showers are not:  They are not small gatherings in ones home where finger sandwiches are served and bows from previously wrapped packages are taped to paper plates, and draped over the brides head, with curly-ribbon streamers in one’s hair.

These are BIG events.

Let me go back….back to the days of Mario Puzzo’s Godfather.  (That would be roughly 1970 to 1975 ish).  Sometimes, one would see bows taped to a paper plate now and again, but what you’d also see is money pinned to the bride’s garments, or her entourage (usually six or seven bridesmaids or more..) taking and opening the gifts as guests arrived, and displaying them promptly on the gift display table along with the open cards pinned to the gift so that everyone could see who brought what.

If the gift were money, the money would be pinned to the card, and the card open for all the guests to see!  Incredible by today’s standards.

Along with these customs, there was usually a massive sweets table that followed every six-course-bridal-shower’s hot sit down meal.  The sweets table usually consisted of a several thousand Italian Cookies.  No joke.

Eventually, in the 80’s some customs started to go by the wayside.  Pinning money on the  bride evaporated, and people started to cut back and boycott the whole ‘cookie thing’ for a while.   However, today, its starting to make a come-back. 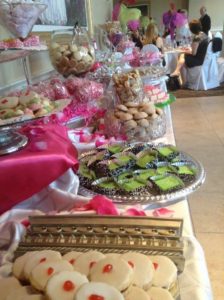 Back in the day, seemingly  unassuming meek and mild ladies who baked for months in advance of a shower, would stuff any amount of Italian cookies from the sweet table into nappies destined for their purses or pockets.  They’d use extra paper plates, boxes, cloth napkins, cello or tinfoil… Or sometimes, they’d bring a spare plastic grocery bag in their purses.   This mad dash to the cookie table was a sight to behold.

If you cant beat em….join em

Nowadays beautiful confections of home baked delicious cookies are skilfully packed by the bride-to-be’s  ensemble, and wrapped to perfection with ribbons and bows, colour-matched to her wedding theme colours.  These delightful boxes of several thousand calories each, are pre-packaged to make the outcome less of a mad scramble among the guests.

Trays and trays of beautiful biscotti are brought to the bride’s house, by many of the invited guests a few days before the shower.  They are artistically plated in order to be displayed in the most splendid fashion at the bridal shower party.  The nicest are selected for display on the reception table, or sweet table, while the traditionally doughy-biscotti like-pizzelle-or-equivalent cookies are packed into boxes, to take home.  These cookies are the delicacies that “the guys” prefer to take to work in their lunches the following Monday.  The ‘guys’ means: husbands, fathers, boyfriends, sons, and other family members. 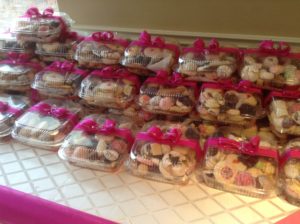 In the last five years, I’ve had attended several wedding showers.  Each time there has been somewhat of a cookie extravaganza at these beautifully -planned events.   One family member had over 100 trays of Italian Bridal Shower Cookies at her shower!!.  It was a sight to behold so much so that when I arrived at the hall, my daughter rushed over and exclaimed

“Mom!” One day at my shower, I am going to beat my cousin’s cookie count!!”

Well…we’ll have to wait and see <3