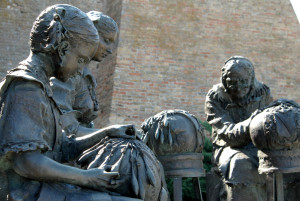 Frills and things. Vintage and lace.

Where did our fascination with lace come from?

Lace is considered to be one of those feminine wardrobe essentials, synonymous with high-heeled shoes.  Attractive, not very practical and likely uncomfortable. That said, why does our attraction to it, seem to start from birth?

I can still recall the day I fished out this find from the back of my sister’s closet. 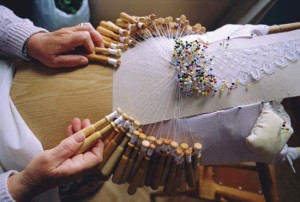 I had thought I had hit the ‘dress-up’ jackpot. What little girl wouldn’t be excited to find a wedding dress, just her size that fit almost perfectly.  I felt like a princess….

until I saw old photographs of my sister and brother’s communion taken in the late 50’s and regaled at how pristine and polished they looked compared to the crimpled blob of a crinolin I was donning over my checkered gabardine pants. 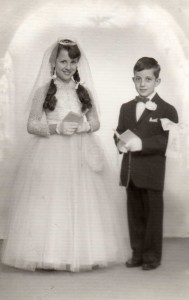 What I didn’t know at the time was that my mother made this dress.

Including the lace pictured here: 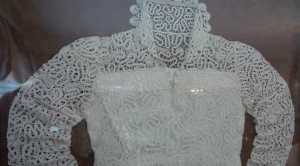 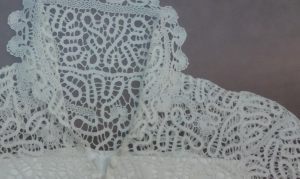 (on a side note, someone skilled in the art would have noticed that my brother’s suit was slightly big.  In fact, my grandfather, upon seeing it for the first time, several months after the photo was taken (we only had snail mail back then) said “it looks like he fell into it?”, haha – cute though 😉  ).

The Cambridge Suit Factory, famous for its DAKS suits aka Coppley Noys was a  factory in Hamilton. I believe now its just called Coppley.  My mother worked there for many years, on the floor, sewing piecework. Her specialty was men’s suit jackets. In 1979 she was chosen from many in the factory to sew Prince Andrew’s navy-style jacket when he attended Lakefield College in Canada. My mother remembers getting his measurements delivered on HRH stationary and remarked at how long his arms were. But I digress yet again…

Back to the wedding dress. I get a kick out of Kleinfeld’s bench…yes I’m a “say yes to the dress” fan.  I just love watching these different women from all walks of life: average, busty, tall, short, small, stout, and rail thin, all looking for that special gown that will make them the “Belle of the ball”. The whole idea of the frilly white dress is such a “consumeristic” custom isn’t it??. Whether its a low end “$1500” no name copy of a Pnina Tournai, or $15,000 for the real deal, there is something they almost always have in common…tears…and lace.

I’m sure that if the first lace makers of their day knew what Kleinfelds actually charges for a dress in 2015 (machine – made lace no doubt) they would be rolling in their graves. In my searches on ebay.it (the italian ebay site), I was looking for vintage lace just to see what it goes for. Very interesting, bobbin lace is still worth something in Europe. If you are ever interested, go to www.ebay.it and type “merletto antico” in the search engine and see what you can find.

Here in North America, someone would have a hard time buying a lace doilie  (that would have taken some poor woman over six hours to make), for anything more than $6. And we think garment workers are exploited in Asia? Why make your own lace then if no one is willing to pay for it? Why bother learning to become expert in lace-making??

Back in Italy, my grandmother used to teach young ladies the fine art of needlework, embroidery, lace making, crochet, & sewing, in addition to taking on commissions. These were more than just a past-time, they were a necessity. People depended on craft prior to the days of the mass produced garments.

When a young woman was about to become a bride , a dowrey in its most basic form consisted of having enough undergarments, bedding and dining linens for the couples’ new life together. Nonna would be commissioned to help prepare dowries which she said, consisted of setting of 12 bras, 12 petticoats, 12 undergarments, 12 nighties, etc…in addition to bedding, and dining tablecoths and napkins for settings of twelve. When she was 16, she began sewing her first king size bedspread which took her four years to complete.

Here it is on my sister’s bed. A few close-up shots.  The angels were all hand drawn out in advance and the patterns created by herself as well.  Note the fine needlework edging around each figure. 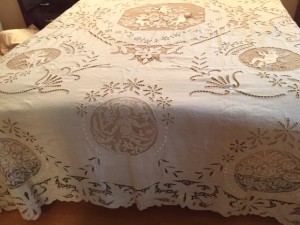 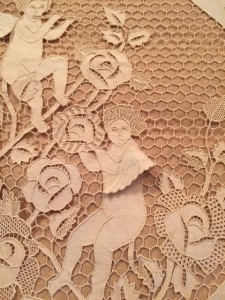 Back in the 70’s when Nonna came to Canada for an extended period of time, she embroidered beautiful linens for my sister as a wedding gift.  Beautiful trim with birds carrying ribbons and branches in their mouths, all along the top edge of the top sheets of bedding sets. Absolutely stunning work.   She would buy the bedsheets ready made, and I watched her strip off top band and sides, and redo the embroidery all by hand.

It was at this time that she tried to teach me how to embroider beginner stitches and she would smile at my ‘handiwork’ (~ which, actually, was quite sloppy), and she’d remark with encouraging words like “dont be discouraged, this takes a lifetime to perfect”.  I would watch how easy she made it look, but no matter how much I practiced, I could never make my stitches look as machine-perfect as her own.  Amazing, really.

My mother knows how to work the bobbin lace or “pillow lace” as they call it in some parts of the world. Bobbins come in all shapes and sizes, and usually have a section for winding the threads in addition to tail to easily handle them. The older bobbins such as the ones shown are hand-carved and along with the patterns shown. These patterns and bobbins are over sixty years old. 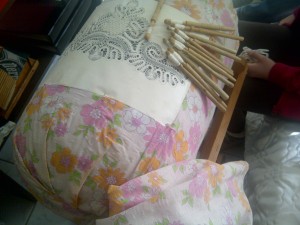 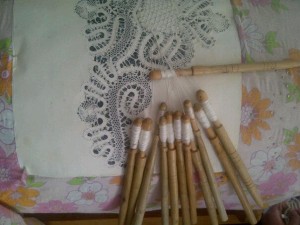 The various regions of Italy today have their own distinct style of lace-making as unique to them as their dialects. In Genoa, the lace had a cording woven through it that is typically considered akin to French lace today. The laces of the Milanese region were similar to what today is known as Battenberg (with thread weaves and tapes running through it). the Venetian laces had a more “Russian and Eastern European look about them. One common ‘thread’ (ha-ha) however, was that they were all made with bobbin spools, and they were all made on a base of anywhere from 8 to over 100 bobbins. 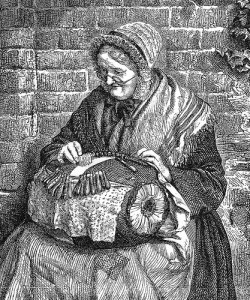 The basic premise is to pin your pre-scribed pattern on your pillow surface and attach your threaded bobbins to a starting point. The bobbins are thread woven over each other, knotted then tied off one at a time with pins. The entire pattern surface is then covered with pins by the time the work is complete. After it is lifted from the pillow, it usually takes ones handiwork to embroider it onto a muslin sheet. Once attached, the muslin backing is cut away from the lacework. 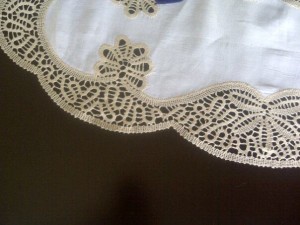 The origins of lace are not well known. Its hard to say which culture or era can take credit for its beginnings. One thing is for sure, many regions of eastern and central Europe developed their own ‘style’ and the art was far-reaching. In Italy, the first laces originated in three distinct regions. The Italian form of lace making is called “il Tombolo” taken from the shape of the pillow used.

Its typically a ‘bolster style’ pillow that is mounted on a stand, that would make it easy for a person to place a chair in front of and sit comfortably for hours.
When I did a photo search of the lace making is Isernia, a city about 200km inland and south east of Rome, it pulled up the following photo: 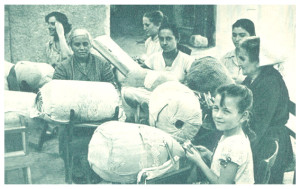 The photo depicts a group of ladies ‘at their work’. Co-incidentally, even though this photo was older, I was so surprised to find that my mother recognized some of the women in it. The ‘tombolo’ as it was called, was characteristic of afternoons spent in the company of friends and neighbours, and was time spent where the women would work, chat, and share. All finished with their familial duties for the afternoon, this time was used to transfer their skills to the next generation, whilst story-telling; in addition to developing a wonderful sense of community.

Once I had discovered how lace was actually made, I never looked at it the same way again. Every time I go into a store, and I see a table cloth, or an article of clothing, I pay particular attention to see if it was machine made (much of the time it is).

If it appears to have been made by human hands, I think of the woman (or man, I suppose) who sat and toiled and secretly thank them for the lovely gift of their golden hands.